A Special Kind of Stupid

Radioactivity in all its forms, is lethal to life. That’s a given. Proven fact.

The first organisms to die are the smallest ones. The single celled, the small animals, like flies and mice.

What part of the ocean is going to die first?

The one celled plants.


Do you know that the world’s largest suppliers of oxygen are the one celled plants in the ocean.
All right, let’s kill them all off and see who survives?


(NaturalNews) The mass dumping of highly radioactive water (measured at 7.5 million times the normal allowed levels) into the Pacific Ocean is not just an environmental disaster; it's also a violation of international law. The Convention on the Prevention of Marine Pollution by Dumping of Wastes and Other Matter, passed in 1972, forbids nations and companies from dumping toxic wastes into the ocean. (http://en.wikipedia.org/wiki/Conven...)

Canada tries to out-stupid the USA

Ah, the fascination of watching this tragic comedy of errors unfold in the U.S. government almost cannot be exceeded. But Canada is sure trying. Its own nuclear monitoring network has simply been shut off, and its website now reads

"Please note that as of March 25, 2011, the frequency of data collection by NRCan using the mobile surveys has been decreased due to the low levels of radiation being detected."

Learn more: http://www.naturalnews.com/031963_radiation_exposure.html#ixzz1IlPqyOrd
Word of Caution here, my spyware tells me that this site contains harmful viruses.
Posted by JM at 10:59 AM No comments:

“The water at Fukushima Nuclear Plant,

we are sorry to make you suffer,

The Swiss Medical Weekly published a report in 2004 confirming that apple pectin was seen to reduce the 137Cs cesium uptake in Ukrainian children after the Chernobyl nuclear reactor disaster. A study led by V.B. Nesterenko at the Belrad Institute of Radiation Safety was performed to see if orally administered apple pectin was effective in binding 137Cs in the gut for food contaminated by radiation, or if eating "clean," non-contaminated food was enough. The study was a randomized, double-blind, placebo-controlled trial involving children from contaminated villages near the disaster area.

Radiation levels were measured at the beginning of the study and one month later. At the end of the trial, 137Cs cesium levels in children who were given apple pectin were reduced by 62%. Children who had received "clean" food and a placebo had reduced radiation levels by only 13.9%. The results were determined to be statistically significant.

Learn more: http://www.naturalnews.com/031969_apple_pectin_radiation.html#ixzz1IlHUbA9s
Posted by JM at 10:36 AM No comments:

December 14, 2009 CBC News Alberta will not stand in the way of the construction of nuclear power plants, Energy Minister Mel Knight said Monday, following the release of a telephone survey that suggests 45 per cent of Albertans want nuclear plants approved on a case-by-case basis. "There'll be no moratorium," Knight told reporters at the Alberta legislature. "We are not proponents of nuclear energy. We're not working with any company to build nuclear energy. … We're saying that we need power, and proponents that want to build in the system in Alberta are welcome to do so." In the government-commissioned telephone survey, 45 per cent of respondents said they wanted projects considered on a case-by-case basis, 28 per cent opposed any proposals for nuclear power plants in the province, 19 per cent felt the province should encourage proposals and eight per cent said they didn't know. In the intial voluntary online and mail-in survey, about 55 per cent opposed proposals for nuclear plants, about 28 per cent felt the province should encourage proposals and 16 per cent felt projects should be considered on a case-by-case basis. However, unlike the telephone survey, the results of the voluntary survey are not considered to be a statistically valid sample of Albertans. The random telephone survey of 1,024 Alberta residents was conducted from July 8 to 20 by Innovative Research Group, Inc. The poll has a margin of error of 3.06 per cent, 19 times out of 20. The surveys were part of Alberta's nuclear power consultation that was launched earlier this year after an expert panel in March identified issues around nuclear power but made no recommendations about the direction the province should take. Plans for 1st nuclear power plant in Alberta There are no nuclear power plants in Alberta. Bruce Power is working on a proposal to build a plant about 30 kilometres north of Peace River, in northern Alberta. Any prospective applications would go through the Canadian Nuclear Safety Commission, where proponents would have to hold public hearings, Knight said. While Alberta does have the power to put a moratorium on nuclear power, Knight said the province isn't going to do that. "This is a really disappointing outcome for Albertans," NDP MLA Rachel Notley said. Even though the government engineered the consultation process to get a certain outcome, Notley said, the results showed many Albertans are still concerned about the launch of nuclear power in the province. "If this government was really interested in listening to Albertans, what they would do is they would close the door [on nuclear power]." The questions in the telephone survey were developed after an initial consultation period that involved discussion groups with 193 people in 10 communities, an online and mail-in workbook that was completed by another 3,615 people, and consultation with community, business, environmental and First Nations groups. http://www.cbc.ca/canada/edmonton/story/2009/12/14/edmonton-nuclear-power-survey-consultation.html
Posted by JM at 1:59 PM No comments:

I've been thinking, how can we overcome all the really nasty things that are happening right now, here in Alberta, without pushing against them?

I realize that pushing against them is just helping them push back and no one is ever going to make a wonderful world that way. Just look at all the people praying for peace. What do we have? War.

We must feel peace in order to have peace.

Here is a quote from a wonderful organization known as the Intenders. Great Group, look them up. www.intenders.org

So, here's how we can have a nuclear free Alberta!

As we apply the Ninth Intent of The Code by envisioning, and thus beginning to create our ideal world, one of the first things that will go by the wayside is the use of nuclear energy.

We simply won't be needing nuclear energy in the golden age we are stepping into, and so we might as well begin by getting rid of all nuclear devices right now.

That even includes the use of X-rays. Some people say, "Well, it's okay for us to use radiation for X-rays, but we don't want it for larger purposes, " but they're missing the point. Radiation in any form is debilitating on the human body. It harms more than it helps.

We've been conditioned to believe that X-rays allow us the only view into the physical body, however this is not true. There are many who are psychic now who can use their talents to look inside the body to help their fellowman. And there are many more who are on the verge of realizing their psychic skills if they would but develop their abilities.

So, let's be even clearer. We don't need nuclear energy for anything, and we never did. The use of nuclear energy is a lot more serious than we have been led to believe.

We've been told that bringing it into an area will bolster a sagging economy, or provide more jobs, or spread around a few more million dollars, but at what cost? Is it really worth it?

Our saving grace lies in our intuition. We have to learn to trust our inner feelings about things like this.

We know, for example, that nuclear energy is dangerous, and yet we continue to take it so lightly, like it is nothing to bring some Cobalt-60 into a neighborhood to irradiate our food.

Or, it is nothing to build a nuclear power plant right next to a populated beach. (Or in our case 20 neuclear reactors on the two largest rivers that run into the Arctic Ocean) JMT. Something just doesn't feel right about that.

Please understand that it is not my purpose to talk about gloom and doom here. I'm simply saying that our priorities are way out of whack.

We don't need nuclear energy, and it's time to do something about it.

Along with practicing The Ninth Intent of The Code we can demand of our leaders that all the research on free energy that's been hidden for decades be made public and implemented as soon as possible; we can begin to replace all nuclear power plants with hydroelectric and any of the many other alternatives available to us; and we can begin dismantling every nuclear weapon on this Earth immediately, and not stop until all of them are gone forever.

That is my firm intention. In fact, let's take it a step further. My inner guidance assures me that when I am in need of turning any doubts, negative thoughts, and/or dark energies around, the most proficient way of doing so is to call in help from the higher realms and command these dark things away with all the inner strength I can muster.

So I'm going to do that now: I command, in the name of The Father, His Son, Jesus Christ, all of God's Holiest Angels, The Highest Good, and myself that all nuclear energies depart from this planet now and that all nuclear weaponry is dismantled and ceases to exist upon this Earth as of this moment.Be Gone Now!

Do you align with me?

My Intention for today is:

I Intend that I am living in a perfectly pristine, healthy, and safe environment.

Labels: Intention for the Enviornment

"My brother, I tell you true. If all who see the Earth as being poisoned would, instead, give more attention to seeing the Earth clean and vibrant, then, very soon, your Earth would be cleansed.

If all who see their nation's leaders as misguided or uncaring would, instead, give more time to seeing themselves being represented by responsible, caring leaders who stand firm for the highest good of all, then, very soon, you would have good leadership.

If all who see their spouses or family members as troublesome or unloving would, instead, give more thought to seeing their loved ones as the shining children of God that they are, then, very soon, all challenged relationships would be renewed and love rekindled.

If all who see themselves as sick or poor or weak of heart or undeserving would, instead, give more energy to seeing themselves as healthy, abundant, empowered, worthy, and lifted up, then, very soon, they would experience all of the good things that life has to offer.

If all who see themselves as a physical body and no more would, instead, give more thought to seeing themselves as an ever-brightening star that resides inside the body, then, very soon, everyone in your world would be shining their lights--just as all of the Elders who have walked your Earth have done.

You would be living in peace, harmony, and comfort in a culture that you have created consciously, a culture which, by your divine right of birth, you deserve to enjoy.

Chief Seattle
Posted by JM at 9:26 AM No comments: 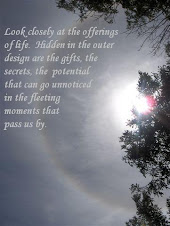 Picture of a Sunbow, Poetry by Alisa

Home on the Range 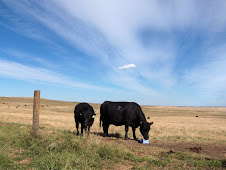